Everybody Consumes, But Users and Customers Vary

A large number of people that use social networking sites mistakenly believe that they are those companies' customers. Unfortunately, reality differs from those perceptions. The SNS end-users are actually suppliers and supply. The customers that belong to SNS are the marketers, the individuals and organizations that pay for advertising or promotion on the SNS. There exists a strong symbiotic relationship between the SNS, the end-users, and the marketers. In this model, the SNS becomes a channel for marketers to target individual end-users. Ultimately, the end-users are supplying themselves to the marketers via the SNS. The below image depicts this model in a visual sense. With the case being that there is a high amount of dependency for both end-users and marketers to exist in order for the SNS to survive, we'll examine both of them. 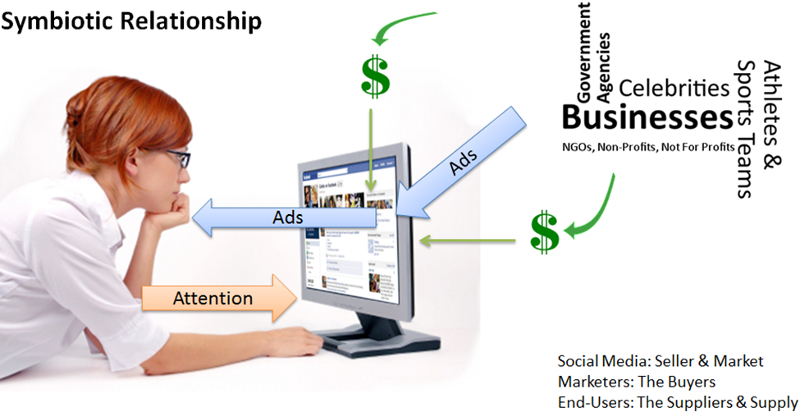 Social networking site usage has grown explosively with an estimated 1.82 billion users worldwide in 2014. The growth is projected to continue; reaching an incredible 2.33 billion users by 2017. US internet users spent 121.1 billion minutes on SNSs in 2012, a 27% increase from 2011. The increase in usage has continued to grow across all age ranges over the past ten years. This continuous growth has been partially driven by the mass adoption of mobile devises, particularly smartphones and tablets. According to eMarketer, while it continuous to rise, the growth of average time spent on SNSs via mobile devices has diminished drastically over the past three years.

Pew Research Center performs surveys to understand SNS user demographics several times each year. One of their surveys from 2013, presented here, shows that 74% of adults online use SNS. It gives us some more detailed information, such as gender, age, and income. The entire survey had 5,112 respondents and each dataset is based on that particular subset of users. So, for example, of the 2,368 men and the 2,744 women that responded to the survey, 69% and 78% of them, respectively, use SNSs. While this is a great amount of information, a lot more can be extrapolated. 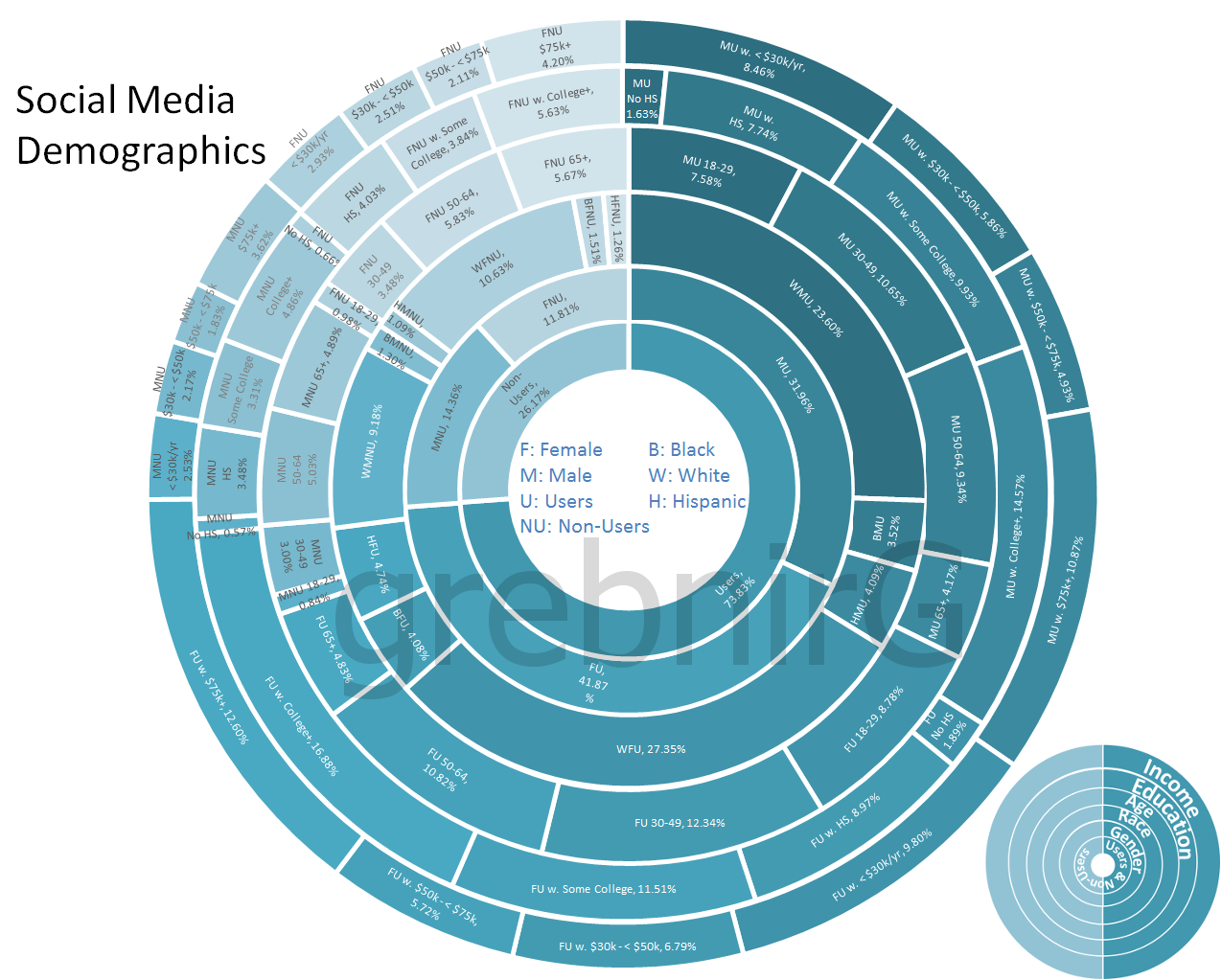 This is a visual graph of who is and isn't using SNS based on the Pew Research findings above. This graph presents the data based on the full 5,112 person population of respondents instead of the subsets. So, of the 5,112 people, for example, 31.96% were male users. You'll notice that the sections don't line up perfectly. That is because the subsets, other than gender, did not account for all 5,112 people for some reason. Looking at ethnicity, the three categories are 3,617 White people, 532 Black people, and 571 Hispanic people. That is a total of 4,720 people.

An unanswered question is what might have happened to the remaining 392 people? Another unanswered question is why Asians were left out as they are likely a significant percentage of the SNS user-base as well. These issues do not invalidate the data as we can examine it as it holds true for the demographics that are included. The darker blue areas, from 12 to about 9, show users and the lighter blue areas, from 9 to 12, show non-users. The categories don't align perfectly because if the discrepancy in the number of people studied within each subset of data. Understanding the non-users is an important first step in finding out why a segment of people might not be using SNSs or who might be the next new wave of users.

BIA/Kelsey reported in February 2014 that Hispanic consumers are outpacing non-Hispanics in their adoption of mobile, social, and online sources for local shopping. The usage of SNSs is not only for shopping -eMarketer found that 86% of Hispanic women visit SNSs to keep in touch with friends and family, the primary reason for the visits.

Students at the University of Washington partnered with Psychster Inc. in an attempt to understand the psychographics of Facebook users. They reported on Facebook's Eight Fundamental Hooks and Six Basic User Types, which is the title of their research. Psychographics attempts to define the personal values that belong to a particular group of people. This allows organizations to cater to their customer-base with a deeper and richer experience. While the report focuses solely on Facebook, some of the finding can be abstracted and applied to other SNSs, but this would be considered speculation unless confirmed with actual research.

In the following section, we'll discuss the marketers that utilize SNSs and how they do it.