Here, we focus on the social media market leader, especially in terms of market share. Securing its place at the top by offering its end-users with valuable social connectivity, information curation, and ever-spreading online ubiquity, Facebook constantly updates its platform in order to satisfy the end-user, the developer, and the marketer. Although they are an enormous organization, they move with the agility of a small start-up, which makes them somewhat unpredictable.

Facebook has over 7,100 employees working with part of the executive staff discussed here. Headquartered in Menlo Park, CA, it has offices and data centers across the US and the world. Its Board of Directors includes, among other reputable individuals, Marc Andreessen; Susan Desmond-Hellman, CEO of the Bill and Melinda Gates Foundation; and Reed Hastings, Chairman and CEO of Netflix.

Mark Zuckerberg, Founder, Chairman and Chief Executive Officer
Mark is the Founder, Chairman and CEO of Facebook, which he founded in 2004. Mark is responsible for setting the overall direction and product strategy for the company. He leads the design of Facebook's service and development of its core technology and infrastructure. Mark studied computer science at Harvard University before moving the company to Palo Alto, California.

Sheryl Sandberg, Chief Operating Officer
Sheryl Sandberg is chief operating officer at Facebook, overseeing the firm's business operations. Prior to Facebook, Sheryl was vice president of Global Online Sales and Operations at Google, chief of staff for the United States Treasury Department under President Clinton, a management consultant with McKinsey & Company, and an economist with the World Bank.

Mike Schroepfer, Chief Technology Officer and Vice President of Engineering
Mike is responsible for harnessing the organization's culture of speed, creativity and exploration to build products, services and infrastructure that support the more than 1 billion people worldwide who use Facebook. Before coming to Facebook, Mike was the Vice President of Engineering at Mozilla Corporation, where he led the global, collaborative, open and participatory product development process behind Mozilla's popular software, such as the Firefox web browser.

Chris Cox, Chief Product Officer
Chris leads Facebook's Product Management, Design, and Marketing functions globally. He is responsible for the core products and features that shape the social experience for the over 1.2 billion people who use Facebook every month. Chris joined Facebook in 2005 as a software engineer and helped build the first versions of key Facebook features, including News Feed. He then became director of human resources, where he set the tone for Facebook's culture and drove the development of its mission, values and people strategy.

Facebook's 2014 Q2 earnings release shows it having $20.769 billion in total assets, $15.557 billion of which are current, and $2.423 billion in liabilities, $1.2 billion of which are current. The majority of its current assets are marketable securities and cash and approximately 50% of its current liabilities are accrued expenses and other current liabilities. This gives it a book value of $20.769 billion. In the first half of 2014, Facebook had revenues totaling $5.412 billion, over 91% of which came from advertising, and total costs/expenses of $2.948 billion. Its net income for this period was $1.433 billion. While it started the period with $3.323 billion and used $2.294 billion in investing activities, it ended the period with $4.384 billion in cash and cash equivalents.

Facebook beats our benchmark in profit margin (highest of all companies within our benchmark portfolio) and the current ratio, but not in total debt to total assets. While this can mean that it has, on average, less leverage, it likely represents that Facebook is not dependent on borrowing for its operational needs. Not really a surprise considering how much cash it's sitting on. 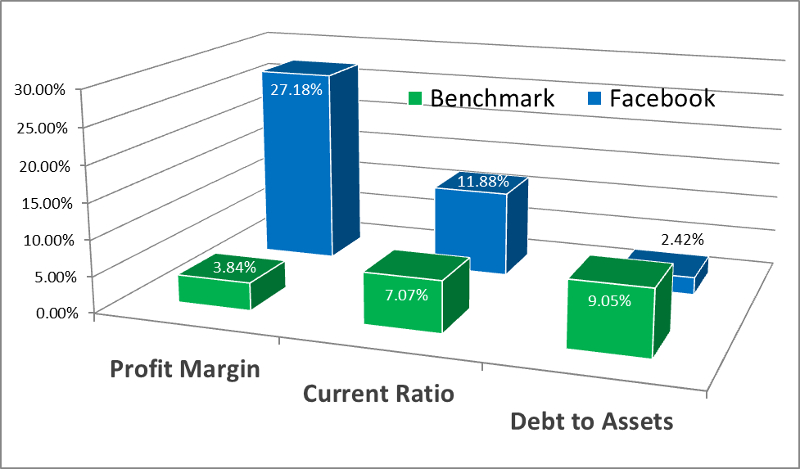 Facebook is publicly traded on the Nasdaq and its valuation at the markets close on 8/4/14 was:

While significantly below in EPS, its P/E is almost triple that of our benchmark, which falls within the market average. This implies that investors expect the stock price to grow in the future, which is far from farfetched considering its income and cash flows. As a matter of fact, Facebook's stock price has increased from selling in the mid $30s to reaching the mid $70s in the past 52 weeks. The company has also performed significantly better than our benchmark and the S&P 500 in 2014.

It comes as no surprise that Facebook outperforms as it dominates all other SNSs in monthly active users, market share, and value.

Facebook offers its users the ability to create and manage, for free, personal pages that contain messages, images, videos, and news feeds -collectively referred to as media. Users connect their pages with friends, family, and many other groups, and generate the news feeds that consist of the collective media set. This is the model of connectivity that has resonated so well with users across the globe, giving Facebook 829 million daily active users and 654 million mobile daily active users as of June 2014. Facebook generates revenue primarily from advertisements embedded in the user's pages and the news feeds. As mentioned earlier, over 91% of its revenue during the first half of 2014 came from advertisements. The not-so-secret method to Facebook's success is in its ability to glean an array of demographic and psychographic data about its extraordinarily large user-base and offer it to marketers for the purpose of finely targeting advertisements at said user-base.

Using a variety of technologies, both custom built by in-house engineers and sourced externally, Facebook utilizes over 30,000 servers for operations that support its ability to be a leading contender in fixed and mobile internet traffic sources in 2014. This puts it on the same list as high-data delivery companies such as Netflix, YouTube, and iTunes. Facebook is heavily dependent on PHP, one of the most widely used web engineering languages, on the server side and javascript on the front-end. Facebook also offers a feature-rich set of APIs for third-party developers. It has seen tremendous growth with mobile users and have implemented mobile functionality into its API. Zuckerberg provided an outline of new features within the platform in his April 2014 f8 Keynote.

Facebook's API offers developers access to all of its products including logins, Instagram, or even Graph Search data. The Facebook API is a constantly updated set of tools to match those Facebook introduces as they are ready for usage.

This includes the functions and features that come out of Facebook's acquisitions. It has completed 47 acquisitions from 2007 through August 7, 2014; a full list of acquisitions can be found here. The types of companies that have been acquired range from performance analysis tools to mobile instant messaging to virtual reality to fitness tracking, and that is almost $20 billion (cash and FB stock) in acquisitions in the first four months of 2014 alone. Based on the information presented in the f8 Keynote regarding the potential use cases for its API packages and variety of acquisitions, it is clear that Facebook envisions its future as a platform that is potentially utilized by any object with an internet connection.

The market leaders discussed here are, unquestionably, kinda successful. They depend heavily on talented individuals across the entire company structure in order to achieve operational and financial success. Talent acquisition has been a hot topic for quite a while and there is an overabundance of articles that outline the best methods. While many of them offer useful advice, the high-level summary is to constantly seek out new talent and be prepared to compensate well.

There is also a theme across our market leaders of large investments in acquiring other companies. Why do they do it? There are five typical reasons for mergers and acquisitions: synergies, diversification/specialization, growth, supply chain, and competition. Rob Renaud at investopedia provides a clear and succinct explanation of each. Steven D. Solomon of The New York Times offers a more critical view of the acquisitions by some of the companies we're examining. While he might lack faith in the smart people at Silicon Valley, he does point out that these companies are focused on diversifying their offerings in order to prevent themselves from becoming obsolete by new disruptive technology.