In this second part of our Market Leaders series, we look at the worlds leading micro-blogging, social media website, Twitter. The ease and convenience it has provided in online communication has taken the world by storm. It continues to make headlines related to market news as well as introductions to innovative new features.

Twitter has over 2,700 employees working with the part of the executive staff discussed here. They are headquartered in San Francisco, CA and have offices in major US cities and all over the world. One of the original co-founders, Jack Dorsey, remains part of the team as Chairman of the Board.

Dick Costolo, Chief Executive Officer
Dick Costolo (COS-tow-low) is the CEO of Twitter, where he is responsible for the growth and management of the global business. Since he became CEO in 2010, the global active user-base has quadrupled to more than 255 million monthly active users; the company has tripled in size, and has opened offices around the world. Under Dick's leadership, Twitter introduced "Promoted Tweets" - contextual advertising based on user interests displayed in Tweets - to increase revenue for the company.

Mike Gupta, Chief Financial Officer
As Chief Financial Officer of Twitter, Inc., Mike oversees the company's financial operations. Prior to joining Twitter in November 2012, he was Senior Vice President, Finance and Treasurer at Zynga Inc. where he ran a variety of financial functions including Investor Relations, Financial Planning and Analysis, Treasury and Corporate Finance.

Adam Messinger, Chief Technology Officer
As CTO, Adam is responsible for long term technology direction and overseeing our technical architecture. He was previously VP of Application Development, where he led various teams, including mobile and web apps, design, search, relevance, and advertising. Prior to joining Twitter in 2011, Adam was Vice President of Development at Oracle where he led the development of Java and Exalogic.

Vijaya Gadde, General Counsel
Vijaya Gadde (VIJ-ee-yah GAD-ee) is Twitter's General Counsel. She previously served as a Legal Director at Twitter, where she managed the international and corporate legal teams. Prior to joining Twitter in 2011, Vijaya was Senior Director, Legal at Juniper Networks; previously, for nearly a decade, she was an associate at Wilson Sonsini Goodrich & Rosati. While at WSGR, Vijaya acted as counsel to the New York Stock Exchange's Proxy Working Group and Committee on Corporate Governance.

Alex Roetter, Vice President of Engineering
Alex is responsible for engineering at Twitter, including the core Twitter services, software infrastructure and operations. Prior to joining Twitter in 2010, he was Director of Engineering at the Laufer Wind Group, developing radar technology for renewable energy applications.

With its 2014 Q2 filings, Twitter shows $3.58 billion in total assets, $2.46 billion of which are current, and $538 million in liabilities, $370 million of which are current. The majority of current assets are short-term investments and cash and two-thirds of their current liabilities marked "accrued and other current liabilities." Another quarter of its current liabilities are short term capital leases. This gives Twitter a book value of approximately $3.05 billion. During the first six months of 2014, ending June 30, Twitter earned $562.66 million in revenue, but its costs and expenses for this period totaled $841.9 million. After taxes, Twitter had a net loss of $277 million, which, as we'll see, will do some major damage to its profit margin. This was made up for, under operating activities, by a $284.78 million stock-based compensation expense, which looks good on paper, but might ultimately belong to employees and not the company. It had started the year with $841 million in cash and cash equivalents and ended this period with $844.97 million.

Comparing Twitter to our benchmark, we see that it performed worse in every category. 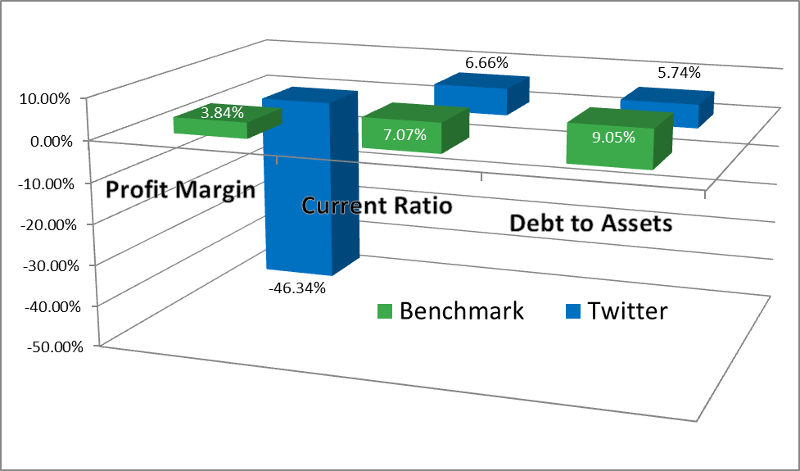 Twitter is publicly traded on the NYSE and their valuation as of the markets closing on 8/4/14 was:

Like LinkedIn, we have a negative EPS, which, again, not only affects our benchmark, but also gives cause for concern for Twitter. This trend of negativity is continued in examining Twitters performance compared to our benchmark and the S&P.

While Twitter's services are in high-demand and used worldwide, its position in the market is lackluster. There are concerns about the actual number of monthly active users on Twitter as it counts, for example, one user with three Twitter accounts as three users. Another issue is how users access to tweets through third-party tools, which results in Twitter ads being circumvented. With more than 85% of Twitter's revenue coming from advertising on the site, an evasion of these ads hurts the bottom line.

Twitter is in the business of tweeting, also known as micro-blogging, a storage and delivery system of textual bits of information that are typically limited to no more than 140 characters in length. As mentioned earlier, a majority of Twitter's revenue, almost 90% in the first half of 2014, comes from advertising, which consists of promoted tweets, accounts, and trends. A second revenue stream is a data licensing system pertaining to the 500 million daily tweets. This is used by companies, for example, to measure response toward a brand or product; by retailers to measure how much of a particular inventory item to stock in a certain period, and even by new businesses to determine the level of interest for a new product or service.

Twitter also offers its services across mobile and non-mobile devices. It has an extensive application programming interface (API) that allows third-parties to utilize Twitter services and data, such as Twitter login or tweet display, on its systems. In September 2010, Brit Selvitelle, a founding engineer at Twitter, posted a blog on the site detailing some of the underlying technology. It, too, is heavily dependent on javascript; it even produces a javascript framework, a code library of functions used for the simplification of development, called Bootstrap, which is used by website developers across the world. A July 2013 blog post at High Scalability offers a great explanation about the logic used on the backend of Twitter. Be warned, it does get technical at times and it's safe to say that some things might have changed at Twitter since this was written, but it is still a worthy the read.

The company has recently made its analytics data available to end-users. Now, people are able to see statistical information about their tweets in order to better understand how others respond to these tweets. This opens the door to an increase in value for the user and it will be interesting to see how this information is utilized.

Twitter's short-form nature provides the company with an array of opportunities to integrate with other industries and services. There have been discussions about mobile payments using specialized tweets and a social newswire based on tweets as well. Looking at its acquisitions, most of the recent ones have been primarily focused on advertising solutions. This makes sense with the majority of its revenues coming from advertising, but it doesn't tell us much about what might be some of the earth shattering disruptions Twitter has planned for the near future.

There is no doubt that Twitter plays an important role in the social media industry as well as the world itself, with 500 million daily tweets ranging from nonsensical jokes to current events. The folks at Twitter believe in an open internet -that data should be free for consumption for everybody- and they show this by allowing access to Twitter's data and services using third-party tools. While this strategy has been highly successful in building an enormous user-base, it might be negatively impacting their profit margin. Twitter has extremely talented individuals working there, but it has not been able to be profitable. One might imagine or even hope that Twitter isn't focused on profitability; that its aspirations are more focused on society than financial success. Even though our capitalistic system doesn't support such an approach, if anybody can hack this system, it would likely be the folks at Twitter and the tweeters who drive it.