There are five high-level categories of external influences that the social media industry has: politics, economics, society, competition, and technology. What you will notice is that these are bi-directional influences. The social media industry has more and more of an effect on these sectors as it grows. Considering the symbiotic relationship between social media, its end-users, and marketers, combined with these external influences, we can make some predictions about the industry's future. Let us look at the key factors that will guide the evolution of the industry. 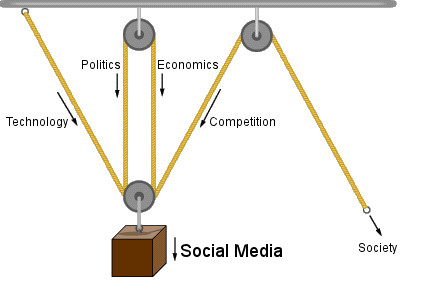 We have seen a lot of news related to politicians opinions about social media and the internet in general. In 2010, private documents were leaked with highly confidential information about, among many other things, the US government broadly tracking its own citizens. This rabbit hole appeared to have goone deeper and deeper with news from the Washington Post coming out in late June/early July 2014 confirming that the NSA spies on average, non-threatening, US citizens. The spying has resulted in the government agency storing very personal, and sometimes even intimate conversations belonging to these citizens. Privacy is an ongoing concern with a significant number of people voicing their discontent regarding third-party accessibility to or visibility of their data. The government can implement tighter restrictions or higher levels of security for personal data, but that might not be in their best interest.

There is currently a threatening issue that pertains to the internet as we know it. This is the issue of Net Neutrality. We are currently waiting to find out if the FCC will change how US citizens will be able to access information online by implementing a tiered payment and speed system for internet access. This can result in more established companies being able to afford more and better accessibility and, in turn, user attention than smaller companies. In mid-July 2014, the FCC had to extend a public comment period to allow individuals to provide their opinions on how the FCC should proceed with this issue. The extension was due to the FCC's website being unable to handle the load of users and crashing, preventing the public from commenting. The irony is that removing Net Neutrality, which is what the FCC is considering to do, can result in these types issues, preventing the public from accessing the services of large numbers of websites whose owners might not be able to afford top tiered connectivity.

Due to policy requirements and pressure from government agencies, major social networking sites are forced to reserve for themselves, within their terms of service agreements, broad rights to remove content. This means that if SNS owners, due to their own beliefs and benefits or due to the request of government officials, disagree with a statement posted on the SNS for any reason, they can and will remove it. This is regardless of the statements factualness, the impact it may have on the person posting it or the person/organization the statement is about. Censorship can be a very dangerous weapon in business and politics and it usually offers little to no benefit to society.

Society is finding new and interesting applications for social media. It has been successfully used by our current president twice to help him win elections. An October 2012 study by PEW Research Center found that 39% of all adult Americans have done at least one of eight civic or political activities with social media.

Medical practitioners, as well as patients, are socializing healthcare related processes. LinkedIn has several groups dedicated to medical professionals. Twitter has been used as a teaching tool with surgeons tweeting steps during surgeries. There are plans to implement various social media tools for informal consultations, appointment scheduling and reminders, and public health notifications.

Even academia is adapting, albeit slowly as usual, to this newfangled communication concept. According to academia.edu, faculty in some colleges are incorporating social media in their classrooms in a variety of ways including posting lectures for download, recruiting students into academic programs, and facilitating class discussions.

The world has seen dictators fall thanks to those country's citizens organizing via social media to execute revolutions. We have tracked record breaking, worldwide responses to soccer games. We have even seen a selfie-addicted Russian soldier get caught in Ukrainian territory by geotagging his Instagram photo during the Russia/Ukraine conflict. Accepting that society is the most important factor in social media's supply chain, the level of excitement to see where social media will be taken next is difficult to describe.